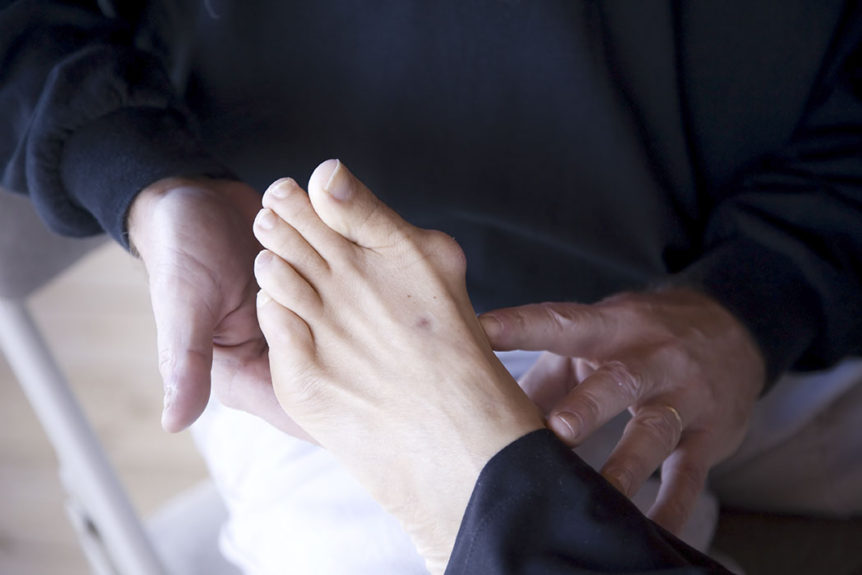 The foot is a complicated area of the body to treat. Each foot contains 26 bones and 33 joints, with a dysfunction at one joint causing problems all over the foot. An example of this is seen through a bunion. A bunion, or hallux valgus, is slow to progress and overtime you see a bump jutting out at the base of the big toe. If left untreated, it can become very dysfunctional, causing the big toe to cross over the other toes. It can also become very painful to walk and wear shoes. Many people resort to having it shaved down in a procedure known as a bunionectomy. Over the last decade, surgeons have been starting to notice the importance of treating more than just the bony deformity, but also looking up the foot for a cause of the dysfunction. As Functional Manual Therapists, we’ve been assessing the foot mechanics for decades and noticing the intricate involvement of the other joints in the foot and the effects it as on the big toe.

In our last blog post, we debunked the idea of people having flat feet. We often see them having too high of arches with the back of the foot and ankle compensating and collapsing in to give the appearance of a low arch. It’s not a coincidence that people who have bunions most often also have “flat feet”.

That same compensation for the midfoot dysfunction can lead to a torsion of the first toe and abnormal forces put through it causing it to push inwards, causing a bunion. When we are assessing a patient’s feet, we put them in a neutral position of the ankle, or rearfoot neutral, and see what happens to their plantar surface contact on the ground and the position of their big toe. The angle of the first metatarsal down to the phalanges of the first toe is important to assess in this position. Frequently, it evens out and becomes more in line with the leg, then let the foot collapse back inwards to its normal resting position and the angle starts to go inwards. This abnormal force put through the foot becomes a compounding factor on the formation of bunions.

We can slow down the progression of bunions by treating the foot and restoring efficient arch mobility. Through soft tissue mobilization, joint mobilizations and strengthening exercises for the intrinsic muscles of the foot, we are able to make a change in the mechanics of the foot and decrease the pressure put on the first toe. Even if you’ve already had a bunionectomy, it is important to have your foot assessed for dysfunctions in the mid and rearfoot. Just shaving down the bony deformity isn’t enough for a sustained change. If the force applied through the toe due to dysfunctions in the elsewhere in the foot are not treated, then you have an increased chance of the bunion forming again.

When bunion formation is caught early, surgery can often be avoided. The bunion is a physical representation of the problem further up the foot. The mobility and function of the big toe is critical for gait and balance. Call today to ask how we can help!